FOCUS ON THE ARUNA DINDANE CARRER 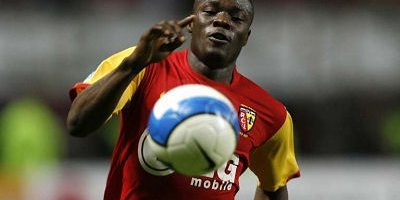 With the Kolo Touré, Didier Zokora, Barry Boubacar “Copa”… Aruna Dindane is part of the golden generation of academicians who have captivated all of Africa and the world with their youth, their ardour, their talent, all sprinkled with their carefree attitude.

Revealed to the public during the African super-cup match, opposing “the kids” Mimosas against the giant Esperance of Tunis. The young Aruna entered the game during extra time when the score was tied, he managed to decant the match with a goal of anthology for a 3-1 victory.

Dindane has been one of the great promises of Ivorian football and has been able to monetize his talent in the highest spheres of world football and on top of everything with the Ivorian national team, he has formed with Didier Drogba, one of the most formidable and effective offensive duos of African football in this 21st century. Technically very fine, with a vision of the game beyond compare, he was a poison for opposing defences. Great craftsman of the first qualification of Côte d’Ivoire to a World Cup finals, the national number 15 has over-marked his time.

After graduating from the JMG Academy, Aruna Dindane immediately had time to make his mark in the Ivorian championship before taking off for a rich professional career where he played at the highest level for several seasons in the European championships, where he scored many goals. Indeed, his European adventure began in Belgium with Anderlecht, where he made his mark to confirm his potential. In his first season with this Belgian club in 2000, he made his first appearances in the Champions League and scored his first goal on the international stage against the great Réal de madrid. In total, in 5 seasons with Anderlecht, Dindane will become a legend of the Belgian club.
He will win several individual distinctions including the ebony shoe and golden shoe during the 2003-2004 season, rewarding the best player and the best scorer of the Belgian championship. From then on, his astounding performances will attract the biggest names.

A career sequence limited by injuries

Finally, he decided to join the Sangs et Or after two aborted transfers, one to Liverpool and the other to Benfica, due to a careless person. In France, despite injuries that slowed his progress somewhat, Aruna became an important part of the Lens set-up thanks to his talent. Then, in the summer of 2009, he decided to offer himself a new challenge but also to relaunch himself by joining the English top flight at Portsmouth. With the English club, he did not disappoint and scored 10 goals in 24 games. Unfortunately, his adventure across the Channel was aborted due to the financial difficulties Portsmouth were facing. He joined the Lakwiya club in Qatar. He finally returned to England where he ended his career at Crystal Place.

One of the great Ivorian strikers !

Fast, twirling, scrappy, dribbling, altruistic and also a goalscorer, Aruna Dindane was a complete striker who could decant a match all by himself. Above all, Dindane’s love affair with the national team is a story of love and passion, with which he marked his passage to the letter of gold. He has always put forward the interest of Ivory Coast. He has given 100% for the Elephants and has always been present at major events. He was for many years one of the historical leaders of the Ivorian attack front.

Determined, generous in his efforts, he always set an example in the field. His many assists and magical flights of fancy against Cameroon are not to be forgotten. As the other said: “Dindane in preparation, Drogba in finishing”.
He made his name in the annals of Ivorian football by being the first player to score a double in the group phase in Ivory’s Coast first appearance at the World Cup in 2006 (Ivory-Coast-Serbia).
The only drawback to his career with the national team was that Aruna Dindane, who had given his all with the national team, came close to winning the 2006 CAF Africa Cup of Nations, losing to the Pharaohs of Egypt. Like Didier Drogba, one of his biggest regrets is that he never won the CAF Africa Cup of Nations with his country.

After ending his career Aruna Dindane lives between France and the Ivory Coast.
While many footballers, once their careers are over, turn to coaching. The former Ivorian academician did not want to take this path for lack of “vocation”, as he himself would say. He preferred to follow a management training course at the Centre for Sports Law and Economics (CDES) in Limoges. Aruna Dindane is also an active member of the Ivorian Football Association (AFI). With this commitment, he wishes to make his contribution to the development and influence of football in his country. We can only wish him good luck in his new adventure and reconversion.