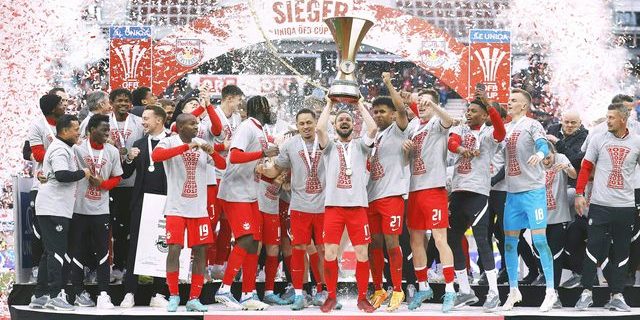 Red Bull Salzburg were crowned Austrian champions for the ninth time in a row on Sunday after a crushing 5-0 victory over FK Austria Vienna, which featured Camara, (Daouda injured and Diambou substituted). “Since 2014, the city of Mozart has hosted the Bundesliga title every year without exception,” the club boasted on its website. The goals were scored by Noah Okafor (2nd), Karim Adeyemi (18th), Luka Sucic (28th), then in the second half by Brenden Aaronson (54th) and Mohamed Camara (85th) from the penalty spot.
It’s pure emotion, a really great feeling,” commented coach Matthias Jaissle. Jaissle, who took over as coach in the summer of 2021, led Salzburg into the last 16 of the Champions League for the first time in their history after being knocked out by Bayern Munich (1-1 in the first leg, 7-1 in the second leg in Germany).

The football club won its thirteenth title since Red Bull took over ownership in 2005 and won the Austrian Cup for the fourth time in a row, achieving the double with this victory over SV Ried.