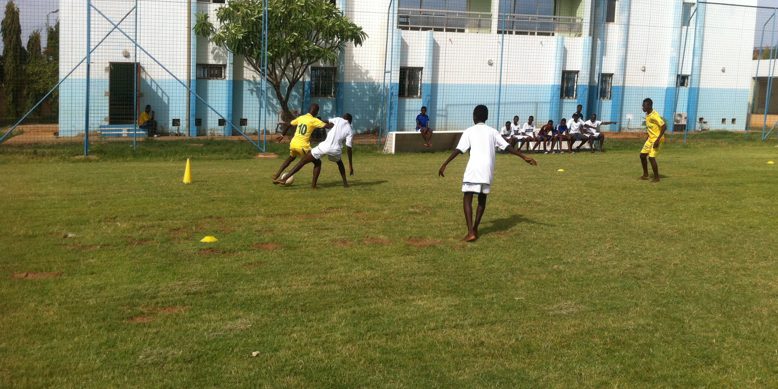 WOULD THE JMG ACADEMY BE ABOVE THE CROWD ?

Maybe it’s too soon to say. But, Saturdays follow one another and are similar for the Academicians who review all or almost all, their opponents of the first quarter with scores more and more rivers .

After the disillusionment of visitors from Badalabougou last weekend, it was the turn of Bamako’s AS Real “Le proprio”, who were determined to take up the challenge.  Because in the first game on March 31, on the same stadium of the Academy, the residents of the place had beaten them, all categories combined, minimal and cadet, respectively by the scores of (10-4) and (14-3). Which already gave the spicy taste of revenge. Our neighbours were academics who thought they knew them well so they wouldn’t get beat up again. One thing is to catch up; but another is to have the means especially when you face an opponent determined to keep his rank.

Who’s next turn ? Anyway, we’ll see you next weekend.

What had been announced as the Mini-Realists’ revenge match could not really be announced. From the first attacks the Academicians besieged the visitors’ camp. The Academy’s residents, with a constant dry-cleaning at their disposal, had David, the Real Madrid goalkeeper, who did not catch the ball and scored against his own side, commit a dumpling. At, 1 -0, the way of the opposing goals now seems to be open to the Academicians who will open the score at the 13′ of the first third by Nsobila David on a pass of Ackah Ballack. The defensive lock made up of the minimal colossus having flown in shatters, the Academicians will allow themselves a stroll to heart joy in the camp of their adversaries. They will then finish the third with a score of (6-0). Despite an opposition of the minimes of Real de Bamako, the second and third thirds will finish consecutively on the scores of (5-2) and (5-2) to the advantage of the Academy JMG. The hosts of the Academy will bet for another time as the score at the end of the match of (16-4).

THE CADETS WON’T DO ANY BETTER THAN THE MINIMES

Under the leadership of coach Diallo aka Papi, the cadet team had a double hope. First, she had to make forget her own liability of (14-3) last March 31 against the same opponent and then erase the scathing defeat inflicted to the minimes in curtain raising. All this was not done to facilitate things for the cadets of Réal especially when the sober captain of the 4th class of the Academy, Diambou Mamadou and his comrades will impose an infernal rhythm on their opponents from the beginning of the game. The strategy of the trio of coaches of the Academy seems to have worked well since the first third will end then on a score of (7-1). After the short period of oxygenation, the game resumes with new recommendations in each camp. The two teams could not separate this second third-time which took place, boring and without any action of brilliance on both sides to end on the draw of (2-2). The last 25 minutes will be more decisive for the Academicians who will put their feet on the floor to finish strong and beautifully the third third on the same score as the first (7 -1). It is thus on the accumulation of the scores of 14 – 4 that this meeting ended, once again in favour of the Academy JMG.

Alphonse Editor-in-Chief of the Bamako Academy

BISSOUMA MAN OF THE MATCH AGAINST GAMBIA
17 January 2022