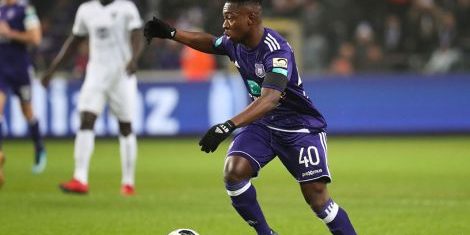 The circumstances of a difficult season have prompted Anderlecht to draw heavily from the young to complete his A team. And one of those youngsters who made his mark on the Brussels Mauves is Francis Amuzu. The young Belgian of Ghanaian origin was the revelation of December in Anderlecht. The 18-year-old had made a strong impression against Eupen and then Ghent.

Anderlecht is counting on Francis Amuzu for next season. The sports director of the Mauves wants to armour the Belgo-Ghanéen by offering him an extension of contract according to Het Laatste Nieuws. He should soon sit down with the management of the RSC Anderlecht for a contract extension. The Belgian international should remain in the senior team next season and fight for a starting berth.

The Imp broke through in December and scored once in ten league games. Francis Amuzu also got the promise that he would play more next season and that he would remain a full member of the A core. Several clubs had come for information for a loan but in vain because Anderlecht counts on him.

Francis Amuzu is a son of migrants. He was very young when his family moved to Mechelen, where he learned to speak Dutch and joined the SK Heffen. That’s where CF Mechelen went to get him. From Mechelen he then went to the Jean-Marc Guillou Academy in Tongerlo and not to Accra as some newspapers have written. As this Academy has an agreement with the Lierse, he found himself at the Lisp before arriving in Anderlecht in April 2015. Amuzu has Belgian nationality and plays for U19. He has two caps and scored a goal