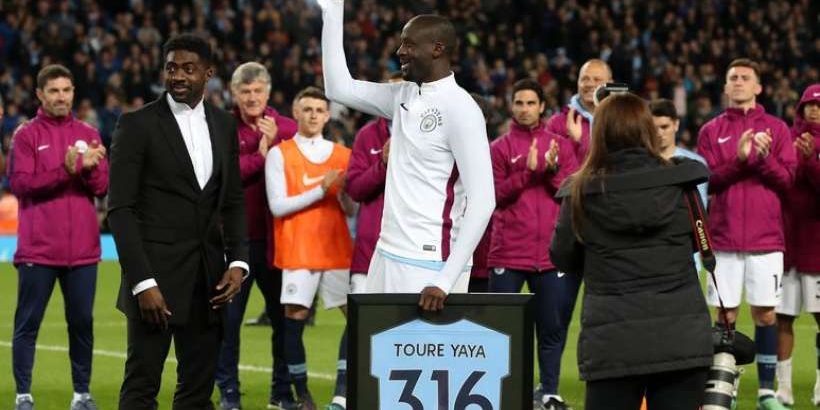 Yaya Touré played Wednesday night against Brighton his last home game with Manchester City. The opportunity for the mancunian club to pay him a nice tribute

On June 2, 2010, Yaya Touré signed a 5-year contract for Manchester City. The Ivorian midfielder, who played his last home game at the Etihad Stadium last night against Brighton (3-1 win), ended the adventure with 8 years to spare. It was also Touré’s first start of the season in the Premier League, proof of his gradual loss of influence since the appointment of Pep Guardiola in 2016. The Ivorian has left his mark on the history of the Citizens, with three championship titles (2012, 2014 and 2018), 1 FA Cup and 2 League Cup and a total of 316 matches played.

It was obviously during the 2012 and 2014 titles that Yaya Touré played a key role for City. The Ivorian was at the top of his game at the time, especially during the 2013-2014 season with 20 goals to his credit. Now a true box to box midfielder, he has often illuminated his team’s play with his arabesques, technique, decisive passes and direct free kicks. The club have not forgotten that by paying him a fine tribute at the end of the game against Brighton.

Gone are the bad memories of Touré’s agent Dimitri Seluk’s often shocking statements and the regular threats of departure, and Man City celebrated one of the beacons of the Mansour era. A mosaic representing a celebration of the Ivorian’s goal has been installed at the training center. Yaya Touré also got a lifetime subscription to Etihad Stadium. Invited to speak after the match, he thanked all the fans, making them roar with pleasure indicating that his best memory remained his goal against Manchester United.

The highlight of the show ? The Mancunian speaker invited Yaya’s brother, Kolo Touré, to enter the pitch to give him some presents, to the sound of “No Limit”, the famous song hijacked by the fans (“Yaya yaya yaya, yaya yaya Touré, Kolo kokokolo, kokolo Touré”). Surrounded by all his partners, the Ivorian took full advantage of his last moments, waiting for new adventures.

One of the most beautiful tributes was paid by the usual captain of the Citizens (Yaya Touré wore the armband for his last match), Vincent Kompany. “Yaya Touré is a very special player and the importance of his contribution to Manchester City is indisputable.

He had a positive impact from the moment he signed for us in the summer of 2011, leading the team with his talent, strength and style. The word “legend” is often used incorrectly but to describe the status of Yaya Touré in Manchester City, there is no better term. I join each City fan in thanking him for all he has given to the club and wish him all the best for the next stage of his career. »