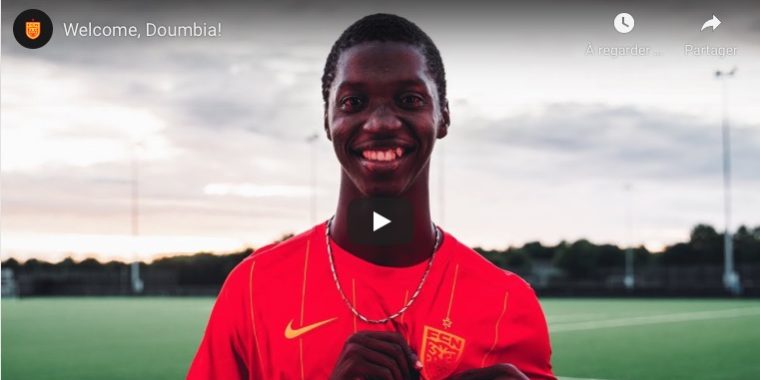 The 18-year-old midfielder from JMG Academie in Mali joins FC Nordsjælland on a one-year contract with an option to buy.

“Mahamadou is an exciting midfielder who we are delighted to have in the team. He is already a talented player with good physique, technique and understanding of the game, but he also has great potential and we are convinced that he can develop a lot in our environment and make a difference to our team. Of course, he needs some time to settle in and get to know everything, but he has the mentality and the tools to integrate perfectly with us.

We are both happy and proud that he has chosen FC Nordsjælland for his next step. It is no secret that he had many options to choose from and had attracted interest from clubs in bigger leagues, but he knew our philosophy and reputation and ultimately felt that our environment offered him the best opportunities for development. We look forward to seeing him on the training pitch with the rest of the team.

“I am really happy that I came to FC Nordsjælland. It became clear to me very quickly that this was the right place for me. I like the environment and the culture of the club and its surroundings very much and I am looking forward to training and starting.

I chose FC Nordsjælland because it is known for giving young players a very good chance in football. Here, age means nothing as long as you perform well, you will get your chance. They have shown that many times before and that is certainly one of the main reasons why I chose to come here.

As such, I’m a player who likes to think ahead on the pitch. I have a good overview and I want to help create chances for my teammates. I like to be on the ball and make myself available all the time.

Of course I dream to develop as a player and to win as many games as possible for FC Nordsjælland. But the main goal is actually to become a good ambassador for Mali and above all to show young Malian players that you have to dare to believe in your dreams and pursue your goals. And I also want to show that you can easily take the step to Denmark and develop yourself optimally as a Malian footballer there.”

Mahamadou Doumbia will train for the first time with his new teammates tomorrow and will wear the number 20 shirt.