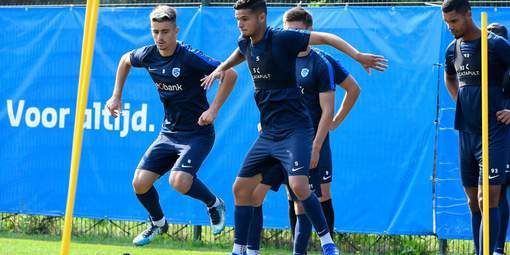 Racing Genk lent his Belgian-Moroccan left-back Amine Khammas to FC Den Bosch, a Dutch second division club where he had been training for several days, he announced in a statement published on Wednesday 29 August 2018 on his website.

Khammas, 19, who arrived in Genk in 2015 from the Jean-Marc Guillou Academy in Tongerlo, had hardly ever started his career since Philippe Clement took over the team, preferring Finnish Jere Uronen and Bosnian Bojan Nastic. In all, he played fifteen matches (694 minutes).
Khammas necessarily aspires to enjoy a much higher playing time in Den Bosch. “I’m certainly very happy to be here,” he admits on the website of his new club, which he calls “ambitious”.

“My first days at Stade De Vliert went very well, and the warm welcome of my new teammates charmed me. I can’t wait for my first few minutes on the field…”

The team is coached by former Ajax goalkeeper Fred Grim. The club is owned by Georgian Kachi Jordania, one of the sons of Merab Jordania, former owner of Vitesse Arnhem.